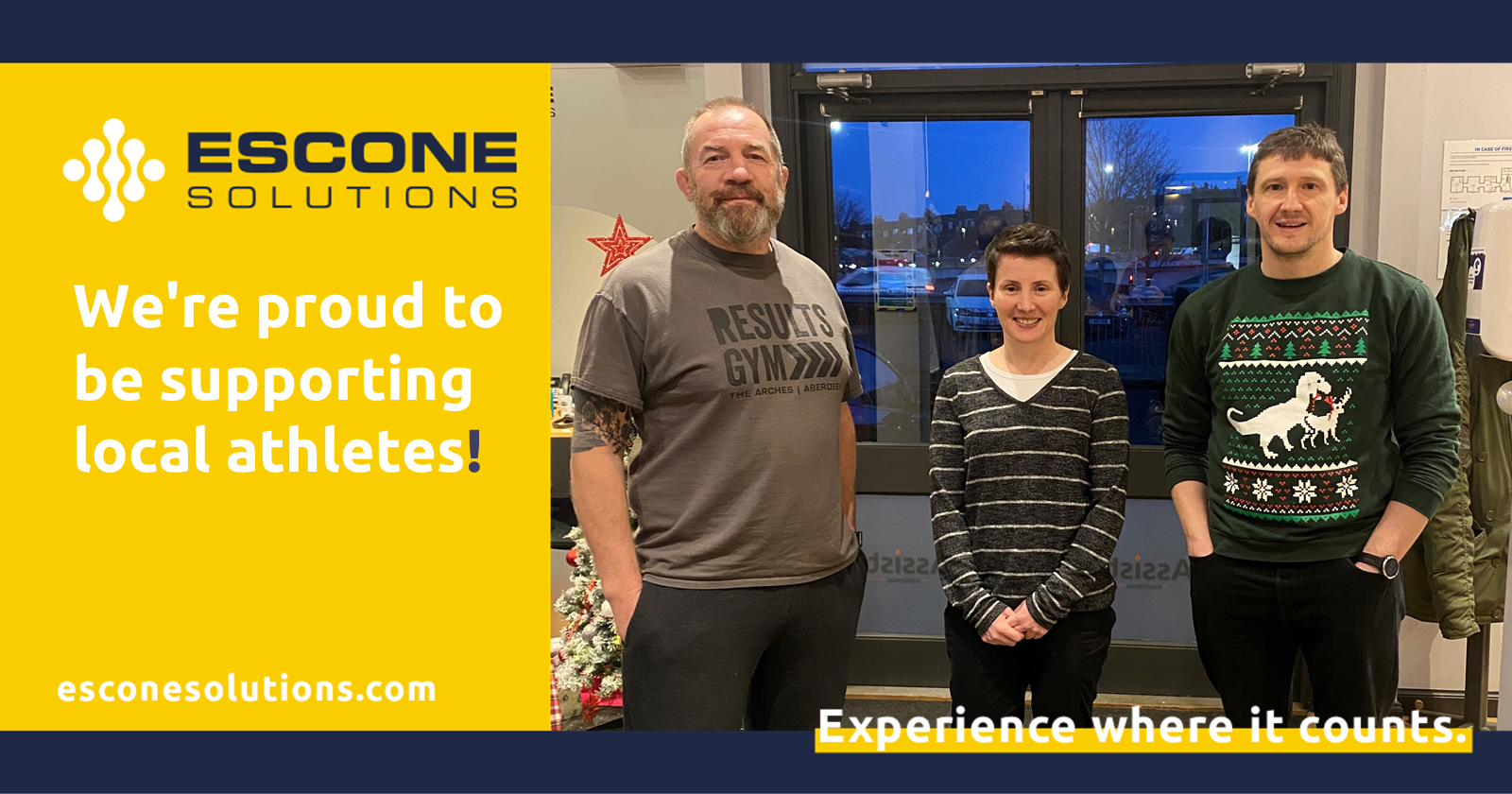 Being an Aberdonian company, it’s important for us to support the community that supports us. So, over the past few years we have been sponsoring several athletes, sports teams and causes – all of which align with our values and beliefs as we are obviously all athletes at Escone Solutions too…!

All our sponsorships mean the world to us and we just love following their journeys over the years. So, here is a wee summary of all our superstars and super causes…

We began supporting Paull ‘The Locomotive’ McBain after he returned to professional MMA having taken three years out of the sport. Back in May, Paull made his return against featherweight James Hendin at Cage Warriors 98 but unfortunately resulted in defeat.

However, in just under 6 months, Paull returned to compete on the Cage Warriors 132 card against Konmon Deh, and won in a devastating fashion in round 2 via ground and pound!

It is been a really great end to the year for Paull and we can’t wait to see what 2022 brings.

We began supporting Sandra Weir back at the beginning of the year to help with costs towards her training and nutrition. Despite some of her races being cancelled, Sandra has been incredibly resilient and kept up with her training and took home the silver in the world aquathlon championships – meaning she has qualified for the European and World Aquathlon for 2022.

Good luck Sandra, we’re behind you all the way!

It’s our second year of supporting Lewis Will and we couldn’t be more proud. His most recent performance saw him come back after a two-year break and take the win in a second-round stoppage – impressive stuff!

We are incredibly excited to see Lewis grow in his Muay Thai journey.

Aberdeen community football club, the Middlefield Wasps, have been around since 1968, and we are proud to be part of their established club by being their kit sponsor for the third year running.

Being their main shirt sponsor for another year is truly a great privilege for us!

We were thrilled to be named Aberdeen Roughneck’s social media sponsor for 2020, however, due to COVID, they were not able to take part in their 2021 BAFANL season due to a lack of player numbers in important positions.

However, we will be continuing to support the team when they get back up and running in 2022!

A recurring theme of cancellations for individuals and the Great Rugby Cycle was no exception. Postponed for another year due to the pandemic, the event finally took place in July 2021 which saw a number of individuals cycle 1,1333 around the Island of Ireland in aid of the MyName’5Doddies foundation.

We were incredibly proud to sponsor the back of the jerseys for such an important cause.

If Escone Solutions super user helpdesk could be of help to your organisation contact us today > Get in touch!

Get the Latest News

Being an Aberdonian company, it’s important for us to support the community that supports us. So, […]

Behind the Avatar – Meet Lewis!

At Escone Solutions, we pride ourselves on the fact our people are the root of our […]

What is a Super User Helpdesk?

We are your office helpdesk’s caped crusaders – we swoop in and help whenever you need us!   Read our latest blog […]

Get in touch to find out how we can provide a solution to help your business.

This website uses cookies to improve your experience while you navigate through the website. Out of these, the cookies that are categorized as necessary are stored on your browser as they are essential for the working of basic functionalities of the website. We also use third-party cookies that help us analyze and understand how you use this website. These cookies will be stored in your browser only with your consent. You also have the option to opt-out of these cookies. But opting out of some of these cookies may affect your browsing experience.
Necessary Always Enabled
Necessary cookies are absolutely essential for the website to function properly. These cookies ensure basic functionalities and security features of the website, anonymously.
Functional
Functional cookies help to perform certain functionalities like sharing the content of the website on social media platforms, collect feedbacks, and other third-party features.
Performance
Performance cookies are used to understand and analyze the key performance indexes of the website which helps in delivering a better user experience for the visitors.
Analytics
Analytical cookies are used to understand how visitors interact with the website. These cookies help provide information on metrics the number of visitors, bounce rate, traffic source, etc.
Advertisement
Advertisement cookies are used to provide visitors with relevant ads and marketing campaigns. These cookies track visitors across websites and collect information to provide customized ads.
Others
Other uncategorized cookies are those that are being analyzed and have not been classified into a category as yet.
SAVE & ACCEPT